I'm still a bit behind on my challenge work and dead in the water on all the other sewing I had hoped to accomplish this past month. Job searching and the accompanying anxiety about not having a job yet have been taking up a lot of my time and draining my motivation. Good news finally came today however. I'm going to be a jeweler's apprentice at Jared The Galleria of Jewelry! It's a really exciting opportunity to learn a new skill set, though I've already been warned I'll be more of a secretary for the first few months - logging repair and custom orders into the computer, answering phones etc... but I do get to polish rings right away!

Even with the lack of motivation lately I've made a good bit of progress on my challenge sewing. I've completely given up on Art for right now, I have a dress half finished but I'm just not feeling it at the moment so it's on the back burner for a while. I'll hopefully come back to it at some point (there's always the re-do challenge) and even if I don't missing one challenge out of the year is still doing really good considering I had completely dropped out by this point last year!

As for the current challenge, #12 Shape and Support, I'm more than halfway done with my piece. I debated back and forth for a while on what exactly I wanted to make. I was thinking of making a regency corset since I had been toying with the idea of making a regency gown for the Politics challenge. The regency dress never came to be, and as I thought about it more I realized I really should make an Edwardian corset. I already have some Edwardian costume pieces and every time I model them for photographs I lament not having the proper undergarments to give them the right shape. I even had a Truly Victorian pattern for a 1903 corset already, sitting around unused for probably more than a year by now! 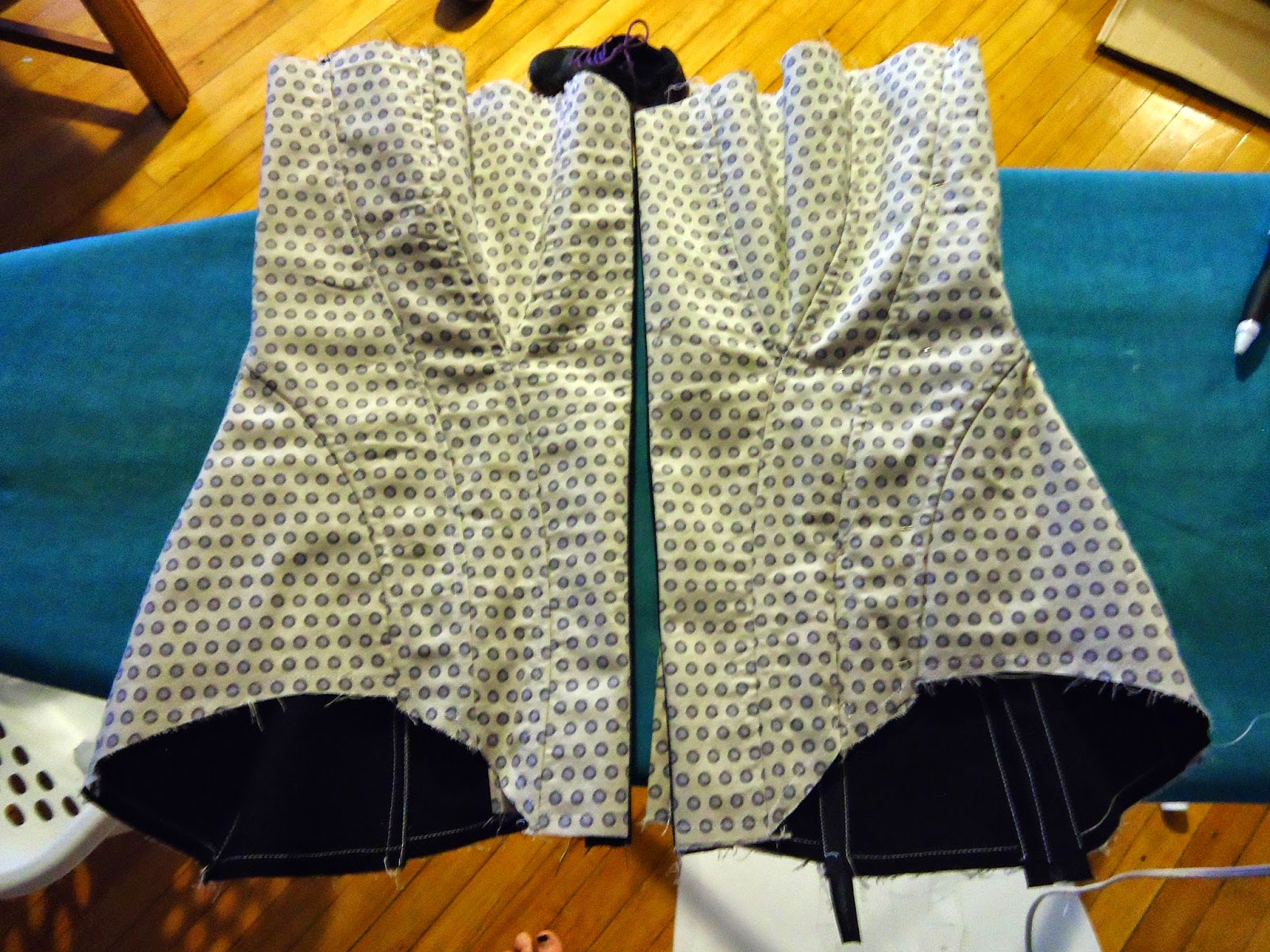 Because of my previous jobless state I dug through my stash to find as much of the materials I would need as possible. I had just barely enough black cotton twill left to squeeze the pattern onto. I didn't want a black corset though, so I dug through for a suitable fashion fabric. There were several choices I considered, but after tearing myself away from the pretty bits of cloth and really thinking about the historical accuracy of the fabrics at hand I chose a pale blue, purple, and white polka dotted fabric.

The reasons I chose this fabric were first and foremost that it is a cotton fabric (already washed even!) and thus more historically accurate than the synthetic fabrics I had also pulled out. Probably the second biggest reason for choosing it was the white background. The Victorians might have loved bright and daring colors for everything including corsets, but by-and-large most of the Edwardian corset examples I've seen have been white or another very pale shade of tan or yellow or beige. Not to say colored corsets didn't exist then, but I can't really recall any examples I've seen recently. I did find a few subtly pattern examples so I feel confidant that my polka dot pattern isn't too far out of the realm of possibility. The polka dot pattern has been around since long before the Edwardian era though I'm not so sure about my pattern since there is a small ring of purple around each blue dot, but that's getting really nit-picky and I don't usually bother being quite that fastidious in my costuming. 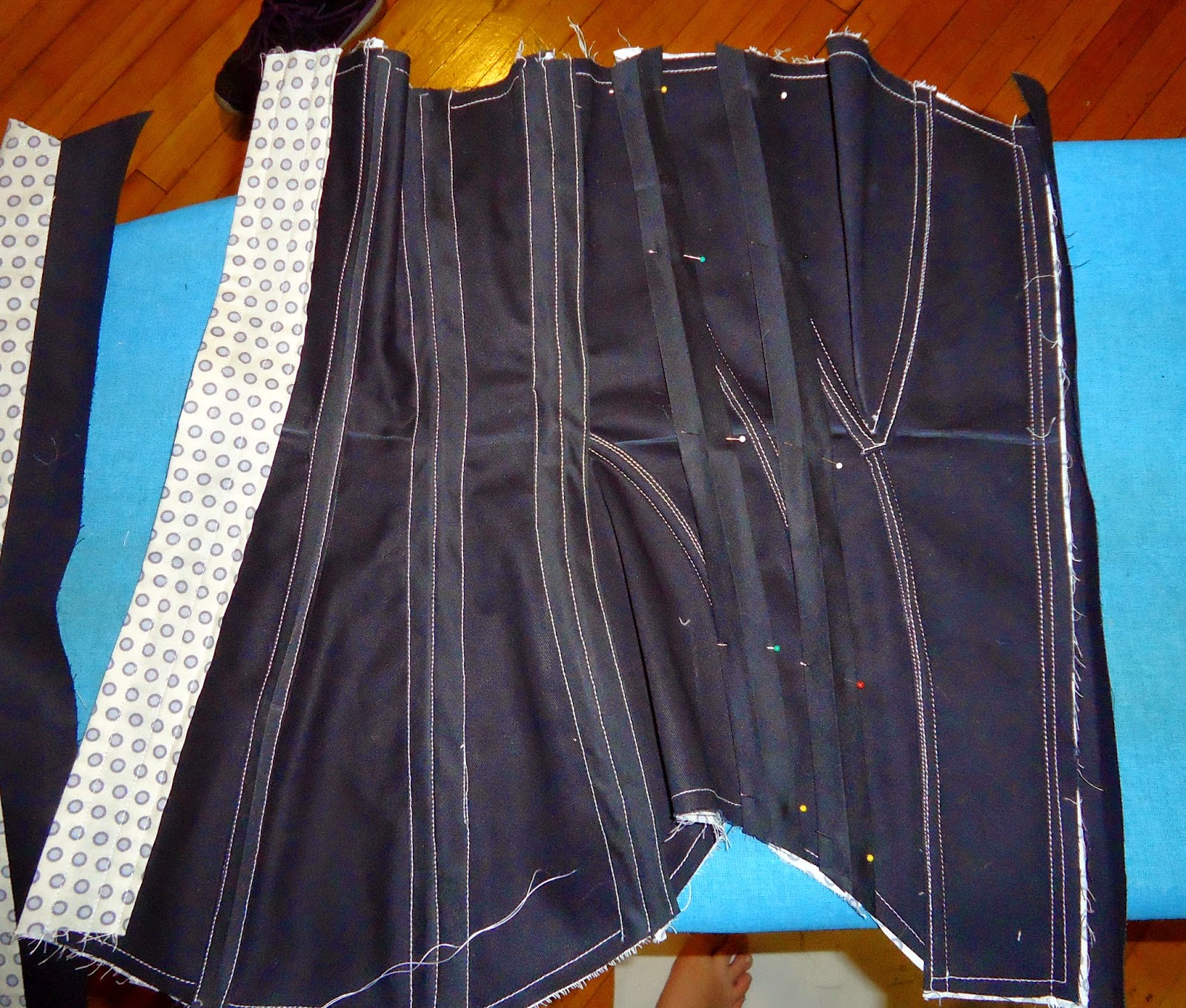 I flat lined each panel of the corset using a roll-pinning technique some of the corset makers I follow on Tumblr have been talking about to hopefully reduce any wrinkles in the finished product. It was then constructed as a single layer corset which the pattern said was most typical of the era. I flat-felled all of my seams for strength though the pattern called for just leaving them as they were. I've been on a year long crusade against leaving ragged edges in my sewing however, and flat-felling was a technique that existed in the time period so I went with it. I hate ragged edges!

I'm currently in the middle of adding the boning channels as you can see in the picture above. Each side is ready to have the busk inserted as well. I scavenged a busk off an older ill-fitting corset and found some half-inch wide bones that I'll insert behind the busk as it's a bit on the bendy side and this is supposed to be a straight-front corset. I have almost the right amount of bones on hand already though there was going to be some creative sizing going on. I was going to make due with the lower quality eyelets I have in the stash, but now that I'm already behind a bit and I've got a source of income again I might order the correct size bones and some stronger grommets and finish the corset once the order comes in. I'd rather have a quality product after putting in all this work anyway.

In the meantime I've already got my project for the next challenge, under $10, all planned out! Going through my pattern stash looking for the corset pattern earlier I also came across a reprint of a vintage Vogue pattern I had picked up on a whim during a sale last year. The pattern dates to 1940 so it quickly got forgotten since 1940 was not in the definition of historical last year. The dates have been expanded just a bit for this year's challenges however, so the pattern will work wonderfully! 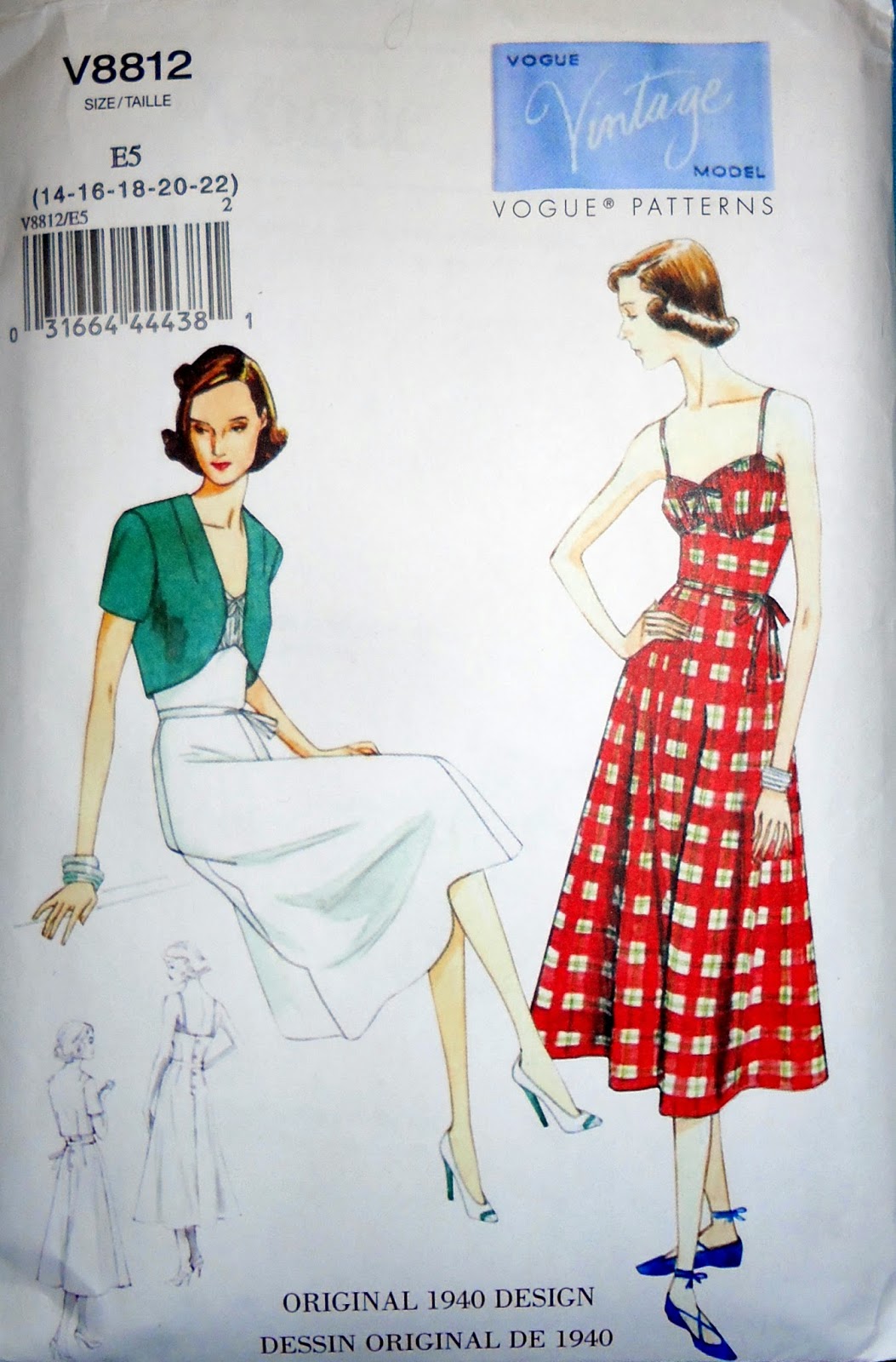 I'm going to be making just the dress, the bolero isn't quite my cup of tea. The dress calls for 2 3/4 yards fabric and as luck would have it I have two lengths of fabric to choose from that I picked up last year for $3 a yard. The first fabric is a navy blue cotton/poly blend suiting fabric with a very subtle silver pinstripe. The second fabric is a gorgeous red cotton sateen. Both fabrics were proving incredibly hard to photograph at night in my not so brightly lit apartment so here are photos of both fabrics with and without flash. Neither picture shows the fabrics quite right unfortunately. 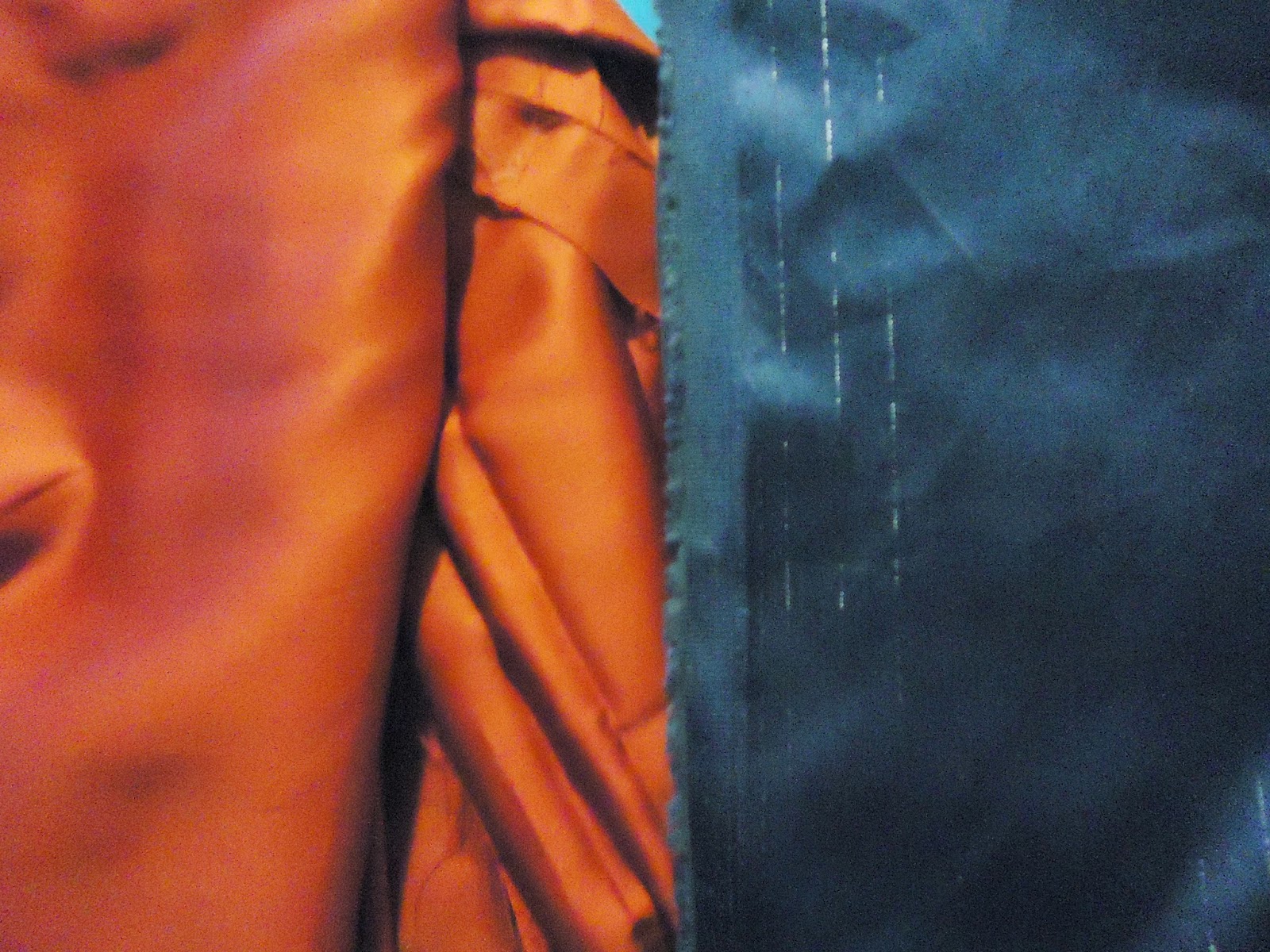 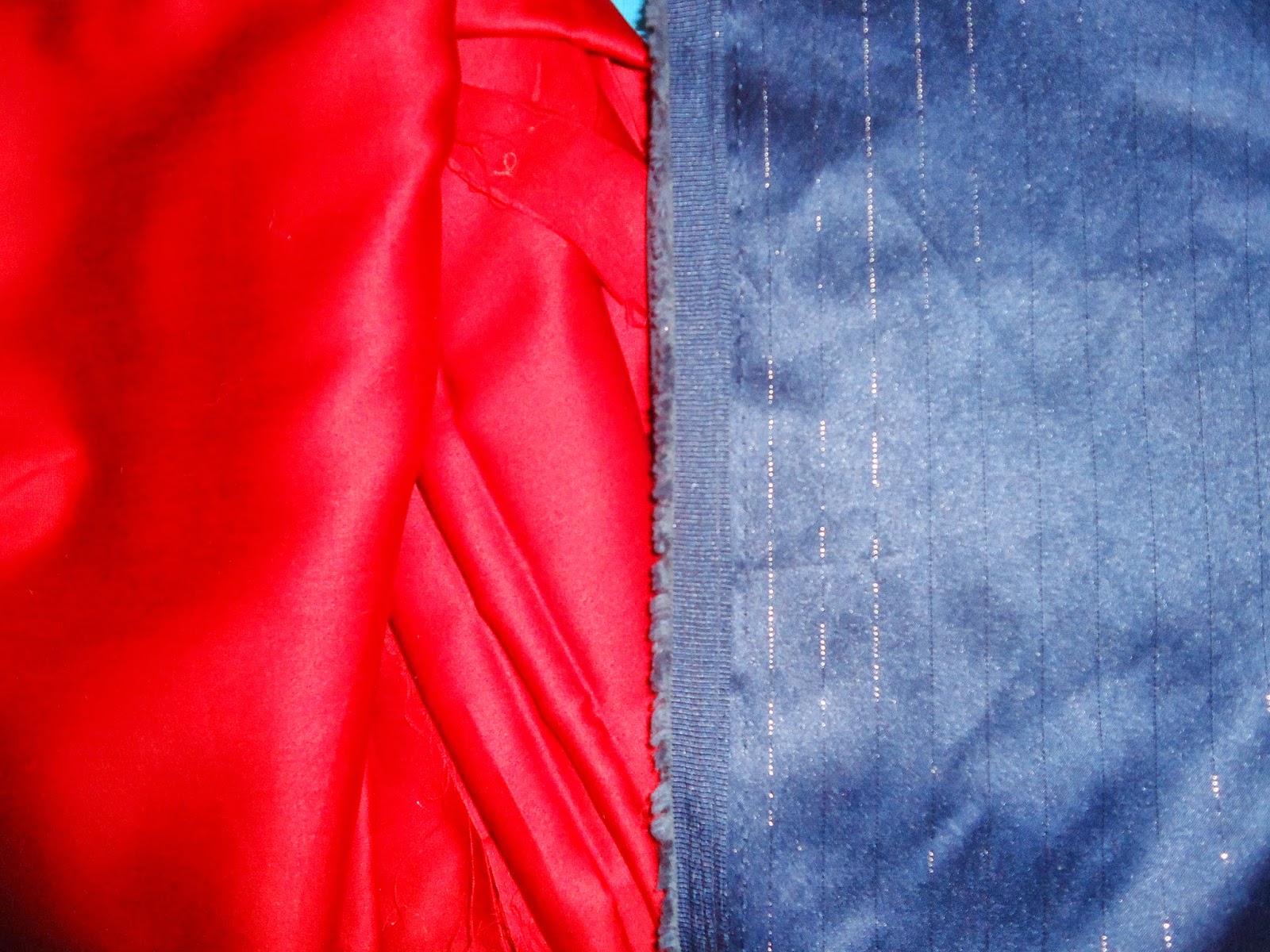 The pinstripe fabric was my first thought for the dress since I thought a solid color might be too plain, but now I'm leaning toward the red. The red is a nicer fabric to work with, 100% cotton, and the pinstripe is just so dark. A nice red dress could be really stunning! The only problem with the red is that I'm just shy of 2 1/2 yards of it. I think I'll be able to finagle it though. There is a belt included in the yardage that is separate from the dress and I could drop completely, or make out of a contrasting fabric. I also think I want to shorten the skirt just a couple inches. I have the pattern pieces for it cut out and they fall down to my ankle and even after hemming I think they could lose two inches or so easily. There's also a pattern piece that is for making these tedious looking self-bound button holes that I would have no problem forgoing and just making regular button holes. Also 2 1/2 yards worth of fabric leaves me with $2.50 for buttons as opposed to $1.75 if I used 2 3/4 yards. So you'll probably be seeing a bright red dress from me pretty soon!
Posted by Ophelia at 9:30 PM

Find me on Tumblr and Etsy